“Stones possess a kind of gravitas, something ultimate and unchanging, something that will never perish or else has already done so. They attract through an intrinsic, infallible beauty, answerable to no one, necessarily perfect yet excluding the idea of perfection in order to exclude approximation, error and excess. (…).For a stone represents an obvious achievement, yet one arrived at without invention, skill, industry, or anything else that would make it a work in the human sense of the word, much less a work of art. The work comes later, as does art; but the far-off roots and hidden models of both lie in the obscure yet irresistible suggestions in nature” (Caillois, 1970).

endolito is an ongoing collection of stones produced inside a body. It consists of around 200 items, including various specimens such as kidney stones, bladder stones, vesical stones, rhinoliths, gastroliths or enteroliths. It is the very origin of the project litofagos and it develops and unfolds as the project does.

The collection is an act of archaeology itself, recovering and exploring objects that link the human and the non-human; the exogenous and the endogenous; the foreign and the bodily. Each of them is a piece of body sedimented and fixed into geological matter, and at the same time is a foreign body that questions the materiality of our biology. The body becomes a mine. 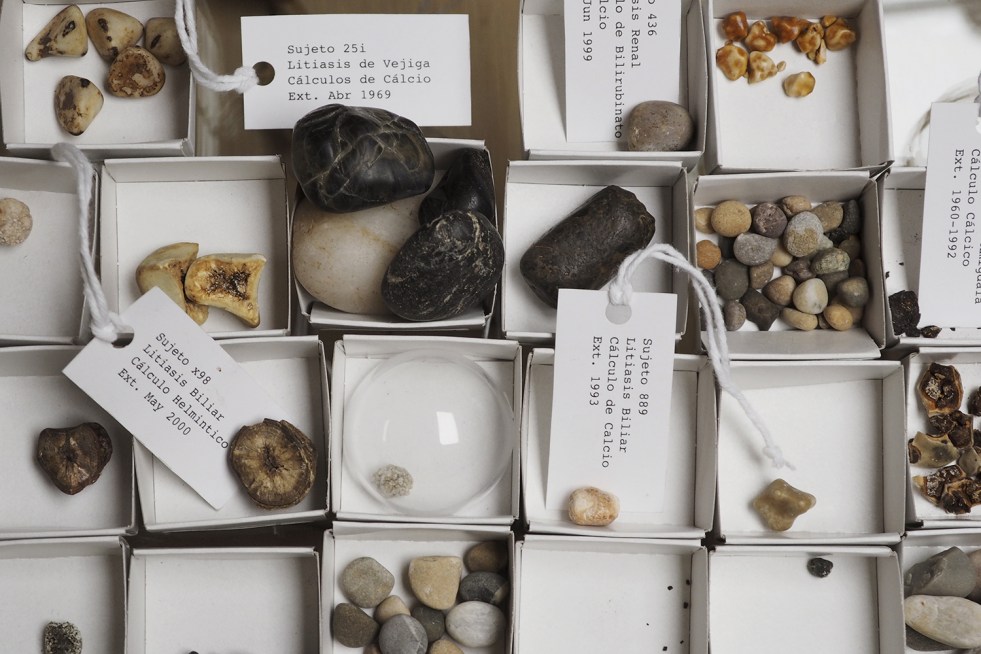 Both exogenous and endogenous, the stones yield an exceptional relationship with their hosts. They become endolitos: elements from the outside world formed in the inside; mineral bodies living inside the flesh of an organism. The act of producing stones internally, reframes what we think of as human – questioning what is biological and what is not by reframing the bonds of what we are made. They appropriate the mineral world surrounding it/us.

Medicine has ceased to build collections like these, as it is increasingly rare for these stones to leave their hosts, usually eroded inside the body. These body-stones hold the genetic material of the organisms they travel through. As sediment, they become recording surfaces that relate to a deep-time understanding of things.

endolito has been developing in different locations around Spain and United Kingdom since 2013, in collaboration with several pathology departments, Manuel Montesinos, Alberto Cueto, Manuel Alejandro Rodriguez and Jose Vicente Casado.