megalito was a collective action carried out in Banff, Canada, in collaboration with the artist and futurologist Dustin Wilson and the Native American art collective Postcommodity. It was the first action of a series of works called litófagos based on the absorption of stones, in which a group of 40 people ingested pieces of a sacred Blackfoot “megalith”.

This action was a response to the expropriation of land in Banff National Park and how it affects the Blackfoot First Nations community, who were historically dispossessed of their original land, and who aren’t even allowed to collect stones on it.

While researching the site, we discovered that certain rooms in the Banff Centre for Arts and Creativity building had exposed sections of the mountain that could not be blasted during the construction. Seeing as they are “inside” the building, those sections of mountain are considered private land within the National Park. For the Blackfoot community, this section of mountain symbolised a piece of their expropriated land. The decision was made to re-appropriate that section of the mountain by eating it.

“(…) I guess they were looking for something under the buildings. Like some stupid architectural spelunkers, they went searching for chunks of the mountain, hidden from plain sight. These people were not satisfied with looking at the postcard picture and breathing the clean air. They felt the need to get into the dirt and the junk space.”

There is no memory without use.

The town of Banff was constructed for tourism in 1880 in the confluence of three valleys, Blackfoot’s sacred territory. It was declared a national park in 1887, and entered a protection process expelling its native inhabitants between 1890 and 1920. Today we encounter an unreachable and fixed stamp, protected by State ethics.

The protection of land by the Parks Canada Agency prohibits the use of those territories for anything other than recreational purposes, in this case affecting the Blackfoot First Nations community, who were historically dispossessed from their original and sacred land, and who are not even allowed to collect stones from it.

The centre was established in 1933 as Banff School of Drama and became Banff School of Fine Arts two years later. In 1970 it changed once again to Banff Centre for Continued Education and was built on the hillside of Tunnel Mountain. During the extensive development in the area and after the accident in 1979, where builders were not able to blast the mountain in order to make the foundation of the buildings because it was moving the surrounding buildings, the rocks started to be incorporated into the building structures. The mountain rocks remained as inhabitants of the buildings inside some basements. These pieces of mountain swallowed by the constructions, were the only private rocks of the public mountain in the National Park.

In 1979 a building burned down, I don’t know if it was the fear of fire but they replaced the wood with concrete. The Jeanne and Peter Lougheed building was put in its place 10 years later. Paradoxically the file I’m reading now is burned as well. Too much dynamite had been used for blasting rocks to make the foundation. There were chunks of tunnel mountain blasted all over campus, damaging a few cars, breaking some windows and leaving a huge crater in the ground. Craters are the result explosions, sometimes from inside the earth, sometimes objects falling from outer-space or from some other unknown trajectories. (…). This crater was covered with a new building leaving a hole in the basement. I’ve asked around and nobody’s really sure if the hole is still there. Someone told me that the hole is now a hyperreality research lab.

It makes me think about the use of a place. It wasn’t related to moving through in a defined path but about becoming possessed by the place through an ecstatic gesture.

The limestone is made of billions of microscopic lives. Every inch is the result of thousands of years of micro-fossil accumulation; crustaceans and cephalopods from the Palaeozoic era cemented together by calcite and dolomite crystals. (…) They never said they did, but I certainly believe they intended to ingest the mountain in order to literally have it inside their stomachs and thus break any kind of immunity they were influenced by. They wanted to infiltrate inside of those basements to profane and appropriate that new territory. And so I believe they ate it. (…) 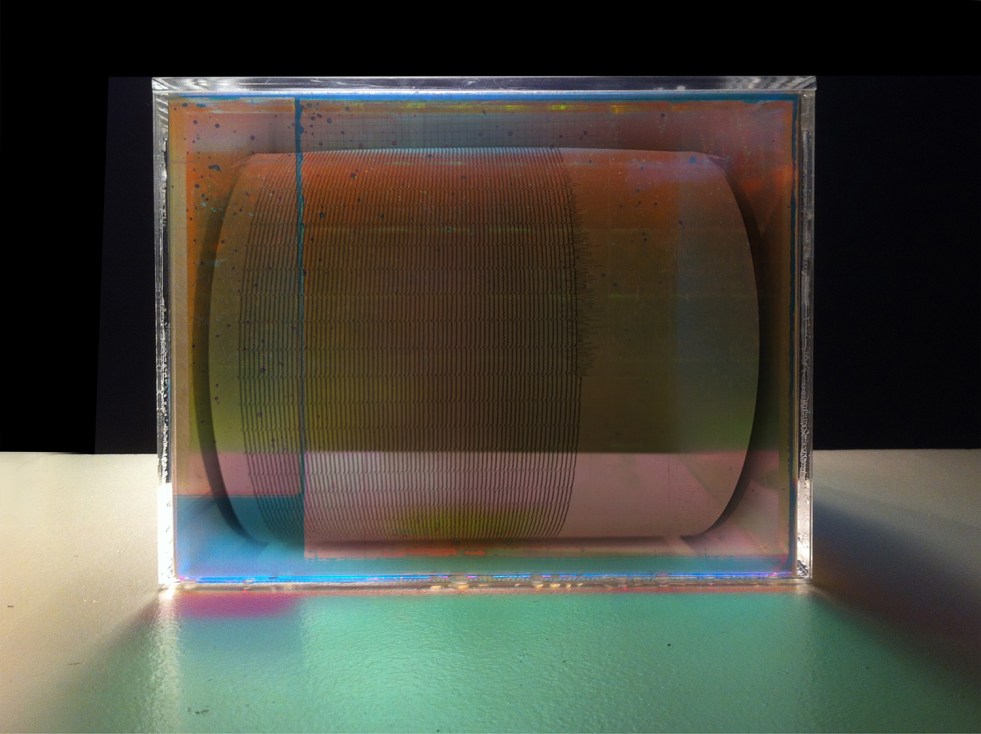 megalito was developed at the Banff Centre during January 2014, in collaboration with Dustin Wilson, Postcommodity, Sean Procyk, Eric Watts,Sebastien Aubin and Daryl Lucero.